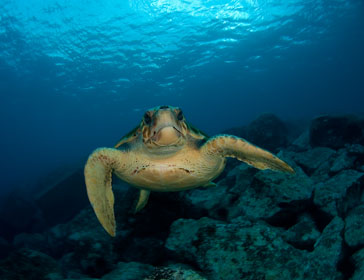 The Canary Island government compiled a list of species whose catch is prohibited, including crustaceans like the brown spiny lobster (Palinurus echinatus), molluscs from the genus Charonia spp., fish species like the Gorean snapper (Lutjanus goreensis), the goldentail moray eel (Gymnothorax miliaris), etc., although this list was created only for commercial reasons. In addition, the Canary Island Catalogue of Protected Species only includes 6 “endangered” marine species, 3 “vulnerable” species, like the red algae (Alsidium corallinum), the marine sponge (Neophrissospongia nolitangere ) and 18 species that are “of interest to Canarian ecosystems”, mainly cetaceans or turtles like the loggerhead turtle (Caretta caretta), the brown macroalgae (Cystoseira abies-marina) or the spotted burrfish (Chilomycterus atringa) among the few fish included in the list.

However, despite the significant populations that inhabit the waters of the Canary Islands, important cartilaginous species do not appear in these lists, including the whale shark (Rhincodon typus), the angel shark (Squatina spp.), the hammerhead shark (Sphyrna spp.), the thresher shark (Alopias spp.), the mako shark (Isurus spp.) or the tope shark (Galeorhinus spp.), many of these commercially exploited for their meat and other derived products.

The same can be said of sessile organisms like corals, gorgonians and almost all the sponges identified in Canarian waters. This is the case of the red gorgonian (Paramuricea clavata), black coral (Anthipates spp.) or orange coral (Astroides calycularis), which also suffer the consequences of the lack of marine protected areas in the Canary Islands.