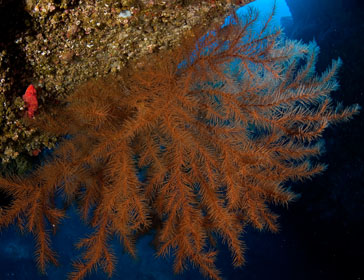 The Canary Island archipelago is located in front of the coasts of the western Sahara, north of the Cape Verde Islands. Thanks to this location, the subtropical climate leads to the development of unique species and habitats with presence of tropical and southern species as well as a variety of autochthonous species.

Studies concerning marine species and habitats in the Canary Islands are scarce and limited to a few meters depth. The archipelago’s narrow continental shelf has limited the knowledge of ecosystems to just a few miles from the coast. A clear example of this is that only 0.15% of the archipelago is protected.

The location of the Canary Islands also makes it interesting from the perspective of international commercial fishing because it is the Community port nearest to Western Africa and the Atlantic area, where important shark fisheries are carried out. The activity is not always legal in ports like La Palma, where landings from trawlers and large longliners from various countries do not always guarantee the sustainability of the fishery.

Oceana and Fundación Biodiversidad carried out a campaign in 2009 on board the Oceana Ranger, during which time fascinating ecosystems and never-before-seen species were discovered in waters of the archipelago. Over the course of the campaign, professional divers equipped with underwater camera equipment completed various shallow dives along the coast. In deeper waters and on seamounts far from the coast, like Amanay and Banquete or the Sahara seamounts south of the archipelago, Oceana used an underwater robot (ROV) capable descending to a depth of 700 meters to film existing marine species and habitats.

Oceana collaborated with experts and scientists from the archipelago to analyse the information and identify the documented species. After completing the study, Oceana and Fundación Biodiversidad proposed protection for new areas (Spanish), which means 15% of the archipelago’s marine areas would be protected.

One of the 42 measures is the collaboration between Oceana, and other entities such as Ecoocéanos, Oceanográfica, Plataforma para la Defensa del Litoral del Sureste de Gran Canaria, UNESCO or Universidad de Las Palmas de Gran Canaria to declare the “Micro Arinaga Marine Protected Area” in Gran Canaria island. The space proposed would include a small strip of sea from Punta de Sal to Playa del Cabron, with an area of approximately 132 acres (1.32 km2) in the northern boundary of the Special Area of Conservation, Playa del Cabron. The Marine Micro- Area would aim to enhance the conservation of natural resources of the municipality by fostering sustainable uses and activities.