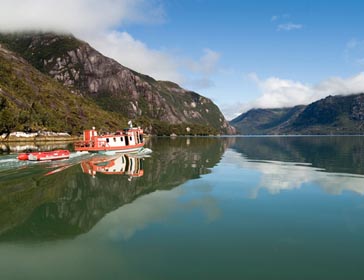 In fall 2008, Oceana embarked on two expeditions to the cold-water fjords of Chilean Ptagonia surrounding the community of Tortel. The team’s goals were to gather information about the species that inhabit the fjords, with the ultimate goal being to establish a Marine Protected Area (MPA) in the region.

Using an underwater remote-operated vehicle (ROV), the team documented 151 marine species, including diverse corals, crustaceans and sea cucumbers. During each expedition, the team also engaged members of the Tortel community and garnered their support for Oceana’s efforts in the region.

Establishing an MPA in the region would prevent the encroachment of Chile’s salmon aquaculture industry. The industry’s introduction to Patagonia would cause pollution, threaten wild fish populations and negatively affect tourism.

In April 2009, Oceana completed a third research expedition to the fjords of Tortel, which again included underwater photography, the shooting of an HD documentary and the use of an ROV to document the biodiversity of this still unexplored area.