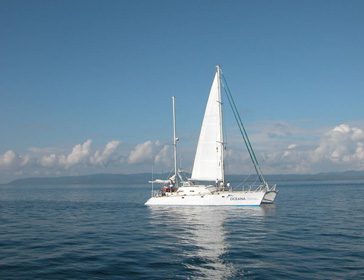 The first stage of the Oceana Ranger 2010 expedition is to study the Seco de los Olivos seamount, also known as Banco the Chella. This important marine area is located off the south-east of Spain and is home to an astonishing variety of species and habitats, including cetaceans, corals, gorgonians and even rare carnivorous sponges.

The research is supported by the European Union through the LIFE+ Indemares project, which aims to contribute to the protection of the marine biodiversity through the creation of marine protected areas within the Natura 2000 Network. The initial plan of the expedition also includes the exploration of other seamounts in Western Mediterranean, very interesting because of their high biodiversity.

These works are done by a team composed of marine scientists, divers, ROV operators, sailors and supporting staff. Professional divers take underwater photographs and film up to 130 feet deep, whereas the ROV or underwater robot is able to reach 3,000 feet.

The ROV is equipped with a CTD device able to measure characteristics of the sea water such as Conductivity, Temperature and Depth. It enables Oceana scientists to garner data about the acidity of the Mediterranean water. Acidification, caused by the increase of CO2 emissions, poses a great danger to corals and shell-forming species.