On Board the Oceana Ranger: Overview 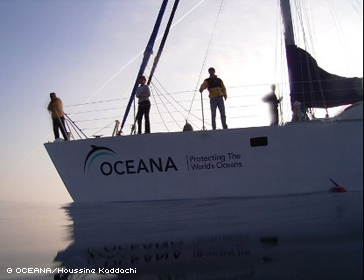 The Oceana Ranger is a vital piece of Oceana’s campaign work in Europe. Custom-made in 1986 as a hospital ship, the Oceana Ranger was donated to Oceana by board member Steve McAllister. Since then, its crews have sailed from the Pacific to the Mediterranean doing invaluable research and documenting illegal fishing, habitats and marine species and evaluating the damages of the destructive fishing to the marine environment -all with the goal of achieving policy victories for the seas.

Since its first expedition in 2005 , Oceana has achieved multiple victories with the help of Ranger’s on-the-water presence.

In 2006 and 2007 the Oceana Ranger crossed Mediterranean waters where the Oceana team identified illegal fishing activities and documented areas of special environmental value.

In spring 2008 the Oceana Ranger sailed to the Atlantic coast of Spain and the Bay of Biscay, to gain knowledge about the Spanish seabed, document illegal bottom trawling and promote the creation of new marine protected areas .

In summer 2009 , the Oceana Ranger sailed to the Canary Islands. The objective of the campaign was to contribute information so that  Spain will have 10% of its marine environment protected by 2012, as required by the United Nations Convention on Biological Diversity.

In 2010, Oceana studied the seabeds of the Western Mediterranean and participated in the European  LIFE + Indemares project, providing information about the Seco de los Olivos seamount, in the Alboran Sea.

In 2011 the Oceana Ranger crossed the Mediterranean and the Atlantic waters to document the underwater canyons and mountains of Southwestern Europe.

The 2012 expedition kept on documenting the Mediterranean and Atlantic depths and studied, for the third and last year, the Chella Bank as part of the LIFE+ INDEMARES project.