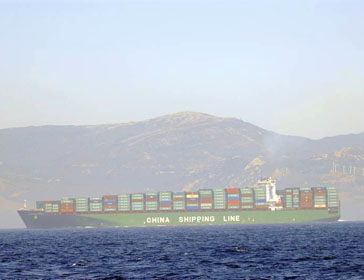 Along with CO2, ships emit various global warming  pollutants, including black carbon (BC), nitrogen oxides (NOx) and nitrous oxide (N2O). These pollutants all contribute to global climate change either directly, by acting as agents that trap heat in the atmosphere, or indirectly by aiding in the creation of additional greenhouse gases.

Reducing black carbon from ships could slow warming, buying time for further steps to reduce carbon dioxide emissions. Black carbon, more commonly known as soot, is made up of fine particles created by the incomplete combustion of a carbon fuel source such as oil or coal. Aging engines and poor engine maintenance can also contribute to incomplete combustion.

Black carbon is known to be a potent warmer both in the atmosphere and when deposited on snow and ice. Black carbon contributes to warming in two ways – through direct absorption of heat in the top of the atmosphere and by lowering the Earth’s albedo, or reflectivity. Unlike greenhouse gases, black carbon is a solid and not a gas and it warms by absorbing sunlight, rather than absorbing infrared or terrestrial radiation.

Black carbon warms the atmosphere by absorbing light, which dries the surrounding air by evaporating the water in the air and on other nearby particles. This reduction of water content decreases the reflectivity of the other particles, thereby allowing them to absorb more sunlight and create an even larger warming effect in the atmosphere.