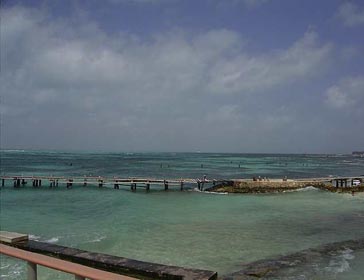 As carbon dioxide levels increase in the atmosphere, the amount the oceans absorb also increases, leading to chemical changes that result in the oceans becoming more acidic. While the oceans are becoming more acidic, they are still on the basic side of the pH scale (basic – neutral – acidic). It is highly unlikely that the oceans will ever become actual acid. However, even small changes in the acidity of the oceans can result in severe ramifications. As they become more acidic, corals and other organisms will find it increasingly difficult to build new skeletons and shells and those that already exist may begin to dissolve.

In 2006, the first inhabited island was lost to rising sea levels. The island of Lohachara, home to some 10,000 people, sank beneath the surface of the Bay of Bengal. This Indian island was situated in an area called the Sundarbans, which has some 70,000 people living on a dozen islands who are all facing the same fate as those of Lohachara. Of the 102 islands in the Indian Sundarbans, only 54 are still habitable. Lohachara’s inhabitants became some of the world’s first global warming refugees, many of whom are still homeless or settled on nearby islands, only to be facing inundation again. Unlike the area’s human inhabitants, its unique wildlife, including 400 endangered Bengal tigers, are unlikely to survive the rising tides.

Rising sea levels are caused by both the warming oceans and melting ice. As water heats above 4 C (39.2 F), it expands through a process known as “thermal expansion”. Global warming is causing the oceans to heat up and expand and therefore rise. The melting of glaciers, ice caps and the Greenland and Antarctic ice sheets — the melting of which is exacerbated by warming ocean — are also contributing to the rising seas.

The 2007 Intergovernmental Panel on Climate Change estimated that sea level could rise between 18 and 59centimeters (7 and 23 inches) by the end of this century. However, these estimates are somewhat conservative and do not include the full effects of a complete melting of the Greenland or West Antarctic ice sheets, which would contribute an additional 12meters (39 feet) combined to sea level rise. While a complete melting of these ice sheets is unlikely by the end of this century, more recent scientific estimates predict a likely 1 meter (3 foot) rise in sea level by 2100.

Scientists have suggested that by 2080, millions of people are likely to be flooded every year and hundreds of millions more may be displaced by rising seas. Whole island nations, such as the Maldives, could disappear off the map altogether and large swaths of low lying areas are likely to be inundated. Sea level rise will flood developed and developing countries alike. Even some of the world’s most important and heavily populated cities, such as New York, London and Bangkok, are at risk of disappearing under the rising waters.

Increasing ocean temperatures and the addition of significant amounts of fresh water from melting ice caps and glaciers may cause a disruption in weather patterns and a breakdown in the marine food web.

The movement of water through the oceans is very important because it circulates heat and nutrients around the globe. The mild temperatures of England, which is on the same latitude as Canada, are due to the heat released to the atmosphere by water that is moving from the tropics towards the Arctic. Water is moved around the globe by the great ocean conveyor belt. As warm surface water is moved away from the tropics, it cools and releases its heat to the atmosphere. This heat then warms parts of Europe. The further north this water moves, the cooler and heavier it becomes, eventually sinking to the lower level of the conveyor belt. This cooler water is then carried along the depths of the ocean, picking up nutrients that have gathered there.

As winds move the top layers of the oceans, cold, nutrient rich waters from the depths are brought to the top at “up-welling sites”. These areas are important feeding grounds for phytoplankton — microscopic plants that float in the light filled waters at the top of the ocean. Phytoplankton feed on the nutrients that come from the deep ocean waters and many other species then feed on them. They are the primary producers of the ocean and form the base of many marine food chains.

Fresh water is less dense than sea water. Therefore, the addition of significant amounts of fresh water from melting ice caps and glaciers may result in a slowing of the ocean conveyor belt, leading to cooler winters in Western Europe and a disruption of the circulation of vital nutrients to phytoplankton. Phytoplankton may also be cut off from their food supply as surface temperatures warm, causing the mixing between the warmer top layers and cooler bottom layers to diminish. A decrease in phytoplankton can lead to a collapse of marine food webs, affecting marine mammals (whales, seals and dolphins), sea birds (albatross) and important commercial fish species (cod, salmon and tuna).

Scientists predict many ecosystems will be greatly altered or collapse altogether as a response to global warming. The spread of diseases will increase as warmer climates create more hospitable environments for disease carrying agents. Some species may shift to cooler areas in an attempt to avoid rising temperatures; these forced migrations will cause the interlinked elements within ecosystems to become vulnerable or fall apart. Other species that are unable to shift or find themselves without food because their food sources have shifted may become extinct. Experts suggest that one quarter of the world’s species may face extinction by 2050. As species are forced out of their habitats by changing conditions, it is likely that pest and nuisance species will move in and take their place, disrupting ecosystems even further.

The future of many marine ecosystems as we know them is in question. Because of global warming, ecosystems are likely to become less diverse and will be less able to deal with other threats such as over-fishing and bottom trawling, which could result in their destruction.

Increasing sea surface temperatures increase evaporation and the amount of moisture in the atmosphere. This acts as the fuel for thunderstorms. As storms move across the open ocean, they pick up energy from the warm ocean surface and become more powerful. The more heat in the ocean’s surface, the more potential exists for strong winds and heavy rains to be created. It is these winds, rains and storm surges (ocean waters pushed on shore by heavy winds as the storm makes landfall) that can devastate lives and cause billions of dollars of damage.