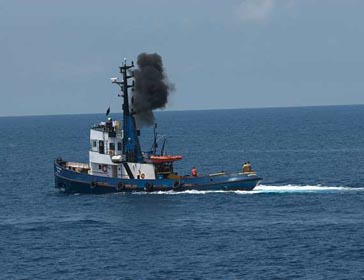 The most common and most important greenhouse gases are carbon dioxide, methane and nitrous oxide. Black carbon is also a potent warmer, although not a greenhouse gas.

Natural sources of carbon dioxide include rotting plant and animal matter, forest fires and volcanoes. The major human sources of CO2 are from the burning of fossil fuels (coal, oil and gas) and from deforestation. Scientists attribute the increased concentration of CO2 in the atmosphere to these human sources.

Methane is created by the decay of organic matter. Large amounts come from landfills, cattle and the rest of the livestock sector (chicken and pigs) in general.

Methane hydrates, a frozen combination of methane and water, are found in vast quantities on the sea floor. It is possible that continued climate change could release these frozen stores of methane and cause a sudden, very large addition of methane to the atmosphere. This would massively magnify the greenhouse effect, causing global warming to reach unprecedented levels.

Nitrous oxide is emitted by bacteria in soil. Agriculture and the use of nitrogen-based fertilizers, along with the handling of animal waste, increase the production of nitrous oxides. Industries, such as the nylon industry, and the burning of fossil fuels in internal combustion engines also release nitrous oxide into the atmosphere.

Black carbon, or soot, is not an actual greenhouse gas, as it is a solid, and warms the atmosphere differently to a gas. However, it has a significant warming effect on the atmosphere. Black carbon is made up of microscopic particles that result from the incomplete burning of organic matter, especially fossil fuels. Black carbon warms both in the atmosphere and when deposited on lighter surfaces, like snow and ice.

Black carbon may be responsible for as much as 25 percent of observed global warming. The overall contribution of black carbon to global warming may be substantial, perhaps second only to that of carbon dioxide.