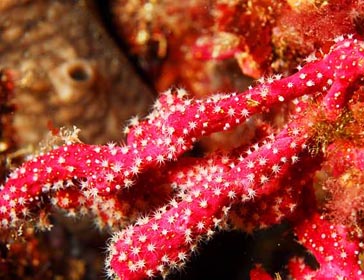 Apart from being a powerful greenhouse gas, CO2 is also dissolved in large quantities in seawater and produces a phenomenon known as Acidification. Generally, when CO2 comes into contact with a water molecule, there is an increase in the concentration of H+ ions, which leads to a decrease of the pH levels and has a subsequent increase in acidity. Ocean pH has suffered a significant decline (roughly 0.1) and this has caused an increase of 30% in the acidity of the oceans’ superficial layer compared to levels of acidity before the Industrial Revolution.

Excess H+ ions cause a decline in the concentration of carbonates that many organisms need to form their skeletons or calcium carbonate shells, including corals or crustaceans. As a direct consequence of this process, marine organisms like corals and coralline algae, molluscs, crustaceans, pteropods and some types of plankton have difficulty forming their calcareous structures, and in extreme cases, cannot form them at all.

Many of these organisms are the base of food chains for thousands of species. Therefore, their disappearance poses a significant threat to both the ecosystems and those populations that depend in some way on those ecosystems.

In order to halt the acidification of our oceans, we must reduce our CO2 emissions into the atmosphere, which come mainly from burning fossil fuels. Uncontrolled increases of CO2 emissions will lead to unprecedented acidification of our oceans and this, in turn, will lead to massive extinction of corals, while posing an enormous threat to marine ecosystems.