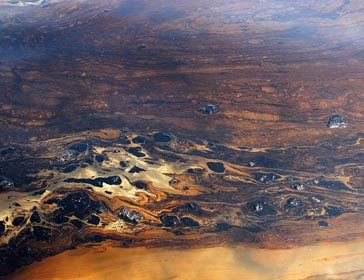 Hydrocarbon spills in the marine environment continue to be one of the major threats to ecosystems and the species that comprise them. They cause direct impacts that can last up to 100 years, and they bring about a bioaccumulation of pollutants in organisms. Spills on the high seas can affect cetaceans, turtles and birds as well as highly fragile deepwater. Whereas on the shore, they can reach areas of high ecological value and impregnate rocks and the entire substrate in their wake, thus making cleanup tasks hugely difficult, that hardly will reach 100%.

Avoiding this type of spill in the marine environment has to come about by reducing our dependence. An adaptation of the energy model to renewable energies is increasingly an urgent need. We must remember that the purpose of all hydrocarbons is to be burned as an energy source. Therefore, if it is spilled by accident or if used for its end use, it has an impact on the marine environment that must be reduced to zero.

Europe is also threatened by these risks. The Northern Sea is one of the most important areas for off-shore drilling. However other drillings in the Mediterranean coastlines of Italy, Tunisia, Malta, Libya, Croatia or Spain can be found as well.

How are produced spills?

Ship accidents. Oil tankers have the capacity to transport between 50,000 and 500,000 tons in their tanks, the routes our preestablished. This generates areas of greater risk of spills. Accidental spills are well-known, the Exxon Valdez 1989, Erika 1999, Prestige 2002 and their effects tend to reach the shore, bringing on the destruction of important ecosystems and local ways of life, such as small-scale fishing or tourism.

Spills on oil rigs. Oil rigs on the high seas are high-risk activities. They may be situated on a water column more than 1,000 m deep and drill 2,000 or 3,000 meters in the marine subsoil. These rigs’ spills can come about during the exploration phase, upon locating the pocket of crude oil, during exploitation, due to isolated leaks or from accidents, such as the one that occurred in the Gulf of Mexico whose effects are devastating because of the continuous spill of thousands of tons from the sea bottom.

Transferring accidents. Sea transport of crude oil generates another risk: unloading or transferring it from ship to land, from rig to ship or from land to ship. These operations are usually performed with the use of floating single buoys offshore. On occasion, these connections to land pipelines fail, thus causing spills into the sea of different magnitudes. This type of facility therefore creates an ongoing risk for spills in the area, both due to the transfer operation and the dense shipping traffic in the area.

Bilge cleaning. The illegal and regular cleaning of the bilge on the high seas. Bilges are the tanks that receive waste from the engine room and cleaning out the tanks with a high concentration of oil and fuel residue. Currently, they are one of the main causes of spills in the marine environment. They are particularly worrying due to their scattered and hard to control origin.

Leaks. The leaks issuing from rigs, pipelines and other means of crude oil almost inevitably wind up in the marine environment, thus generating another source of hydrocarbon pollution. 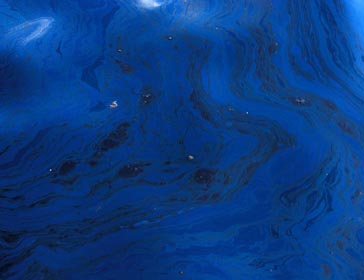 What consequences do they have?

The effects of a hydrocarbon spill depend on its composition, the area it affects and the volume of the spill.

Fuel oil or heavy hydrocarbons are black, viscous, non-water-soluble and with an ignition point above 65 ºC[1]. They cause a floating mass that limits the light that enters the marine environment, hinders animals such as cetaceans, turtles and those that need to rise to the surface from breathing and impregnate birds that are within the spill radius. Deepwater spills are especially harmful because at low temperatures, they increase their density, remaining at the bottom for tens of years without being able to remove them. Likewise, on the shore, they produce severe damage upon impregnating rocks, coastal ecosystems and submerged and emerging sandy area. This makes it practically impossible to completely remove them, and they cause pernicious effects for decades.

Diesel oil or light spills take on shades that are between amber and blackish, water soluble and with an ignition point above 55º C[2]. As a general rule, they are volatile. Therefore, spills partially pass into the atmosphere. Nevertheless, their soluble nature makes them hazardous when they disperse via water and being easily assimilated by organisms.

Both tend to be assimilated by marine organisms, especially those that live anchored to the bottom because it is impossible for them to move around. Absorption by prairies and other photophilous organisms generates the first step of bioaccumulation. Therefore, these pollutants pass from one to others upon being consumed, and their concentration increases as they go up the food chain. Thus, large predators (where human beings are the last link) are the ones that accumulate the highest amount of these pollutants in their bodies.

How may they be avoided?

Certainly, the best method to avoid petrol spills is reducing fossil fuel dependence and developing an energy model based on energy production from renewable and clean energies. The marine environment can offer a valid setting for renewable energy production, from wind power, that is currently the most developed one, but also tidal power or wave power that come from waves.

As immediate actions, strict safety and control measures must be established. This is because the damage from accidents and spills cause large-scale ecological and economic disasters. The prohibition of monohull ships in 2005 by the International Maritime Organization[3] and their gradual removal since then has been an important step due to the risk that they entail. However, it is necessary to establish measures such as limiting the depth of offshore rigs, increasing safety in pipeline piping, especially in countries with laws that are more lax, ban unloading and limit ship traffic in areas of significant ecological value such as the surroundings of marine protected areas or coastal protected areas. By that same token, have action and contingency plans in light of possible spills of any nature, especially at the “hotspots” such as the Strait of Gibraltar or the Galician coast. These spots should have the basic tools to act against a spill, aspects that people began to consider after the accident of the Prestige.

How to act in a spill?

The main determining factor in a spill is time. The marine environment’s dynamic nature is going to cause the spill’s slick to expand without question. To cut the slick short, support walls are use. These walls enable a certain control over the spill’s expansion, the objective being to prevent the spill from reaching the shore. Crews begin to clean it up immediately with the different methods in existence such as absorption via dredges. However the cleanup methods are slow and difficult on the high seas. Nevertheless, spills that reach the shore cause other difficulties. The fuel oil easily adheres to rocks and other substrates, making it very difficult to remove it as well as leaving its wake on the entire course it covers.

Therefore, it is evidenced that acting against a spill is difficult and its effects do not disappear immediately. Between 20 and 100 years are needed for the ecosystem to recover without considering the bioaccumulative effects that spills bring about. Therefore the prevention plans and the reduction of dependence on these fuels must be aspects to be encouraged to avoid the negative effects that a spill in the marine environment can have.

What makes the case of the Gulf of Mexico special?

The continuous spill from the sea bottom 1,500 m below is threatening deepwater ecosystems of high ecological value that are highly fragile. This is because they have a low reproduction rate such as sharks or corals. Furthermore, the deepwater current system is different than the surface current system and may cause a greater dispersion of the crude oil. On a different note, the course from the bottom to the surface is affecting pelagic ecosystems along the water column that creates the big spill on the surface. This is already affecting turtles, cetaceans and birds. The spill’s arrival on the shore would affect major ecosystems due to their biodiversity and to regenerate marine resources such as fishing resources. 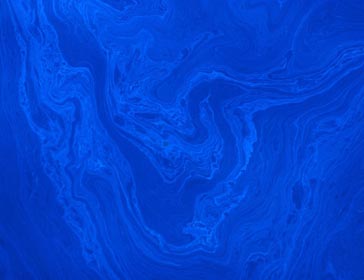 Who is responsible of the oil slick?

On the Gulf of Mexico, there are some 4000 marine structures such as rigs, drilling ships, jackups, etc. This type of operation is usually subcontracted by oil companies so that the chain of responsibilities is often diluted in the corporate web, and the greatest cost is borne by the taxpayer. Furthermore, after sealing the leak and cleaning the effects of the spill, there is a long road for follow-up, monitoring and methods to mitigate the effects of the spill in the medium and long term. In the case of the Exxon Valdez, they still persist 20 years after the accident. These are costs that will be assumed with difficulty by the contracts or the oil company itself, the operation’s beneficiary.

[3] Schedule of monohull ship removal. Rule 13G of Annex I of the MARPOL Convention 73/78