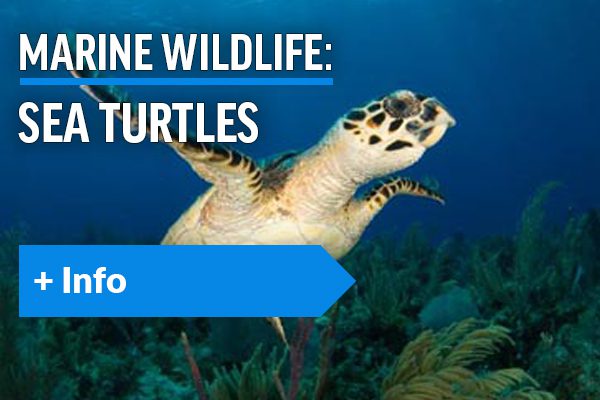 Sea turtles are a migratory species which, no sooner have they broken out of their eggs on the laying beaches of Florida, Yucatan and other locations on the east coast of the Americas, embark on a frenzied race towards the sea.

At the water’s edge, hundreds of tiny turtles barely 15 centimetres long meet the strength of the waves head-on, driven onwards by a genetic imprint and guided by the earth’s magnetism and the frequency of the waves, which lead them to embark on a long journey of more than 10,000 miles across the entire North Atlantic. But their story began some 60 days earlier…

The breeding season of the loggerhead turtle (Caretta caretta) begins in March and reaches its climax between June and August, but will even extend into the next few weeks until October. The females are ready to reproduce from the age of ten. Anyone who has seen turtles laying will appreciate what a difficult and fascinating process it is: at night, preferably without a full moon, the turtles leave the depths of the ocean and drag themselves up the beaches until they find the right spot for laying.

Once there, they start excavating with their fins to form the nest. Patiently, their faces and bodies covered in sand, the female turtles lay, one by one, around a hundred eggs similar in size to ping-pong balls. 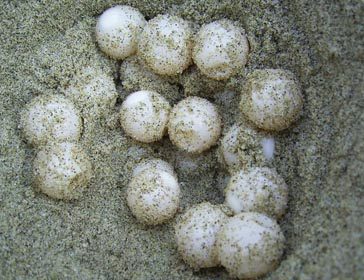 Turtles tend to lay between two and seven times a year and then rest for two to three years until their next laying sessions. The eggs hatch after an incubation period of 60 days, giving rise to the next generation of turtles.

In order for the eggs to hatch successfully, the key factors are the granolumetry of the sand on the beach and the temperature of the nest. The latter factor determines the ratio of males to females; the higher the temperature, the more females are born. The borderline temperature at which the gender of the turtles can be modified seems to be 29ºC, with a females-only outcome when the temperature exceeds 33ºC. And thus we come back to the beginning of our story…

The Sargasso Sea is the first destination of the recently-hatched turtles. There, they spend a period of time known as the “lost year”. This name came about because until quite recently, scientists did not know what happened to the animals between leaving the laying beach and turning up once again as young turtles. The logical question was where had they been in the intervening time?

In the Sargasso Sea, the baby turtles feed on the crustaceans and other small creatures that they find amongst the algae. They then embark once again on their journey, taking advantage of the Gulf Stream to head towards the Azores and, from there, to the European continent.

The majority follow the warmer waters that take them to the coasts of Spain and Portugal. Many enter the Mediterranean where they congregate in numbers that exceed several hundred thousand turtles. Here, too, they encounter the less-numerous colonies of loggerhead turtles (Caretta caretta) that do their laying in this sea, mainly on a small number of beaches in Greece, Turkey and Cyprus.

From the west of the Iberian Peninsula, the Gulf Stream, aided by the trade winds, pushes them in a southerly direction, traversing the western coasts of Africa until they pass by the Canary Islands and Cape Verde. To the south of this archipelago, the current changes direction and heads back out to the Atlantic Ocean in a westerly direction towards the waters of the Caribbean and the east coast of the Americas, where, once they are adults, they will lay their own eggs.

Oceana, on the turtle trail 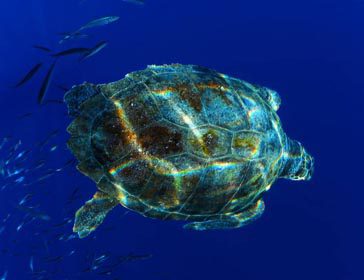 In 1986, a North American biologist specialising in sea turtles, Archie Carr, presented the hypothesis that the loggerhead turtles that laid their eggs on North American beaches made a lengthy round-trip migration across the entire Atlantic, taking advantage of the Gulf Stream. He supported his hypothesis on the size of individual turtles caught in various zones of the Atlantic, including the US coasts, the Sargasso Sea and the Gulf of Mexico.

En 1993, Spanish researchers – Xavier Pastor, the Director of Oceana in Europe; Ricardo Aguilar, Director of Research and Projects for the same organisation, and Julio Más, Director of the Coastal Centre of the Spanish Institute of Oceanography in the Mar Menor (Murcia) – corroborated the transatlantic migration hypothesis. Their work provided data on populations in the Eastern Mediterranean whose size perfectly matched the type of specimens that would presumably be found in this zone if completing the cycle described by the North American researcher.

All sea turtles are regarded as a threatened species in danger of extinction. The importance of the loggerhead turtle laying beaches in the United States has been established beyond any doubt: they are home to the second largest population in the world, which maintains 35-40% of the world population of this species, making around 68,000-90,000 nests a year.

For this reason, from its offices in Europe and America, Oceana is undertaking a study on both sides of the North Atlantic in order to understand the true scope of sea turtle migrations.