For decades, EU fisheries subsidies have fuelled the growth of the EU fleet to a level estimated to be two to three times higher than what the ocean can sustainably provide. 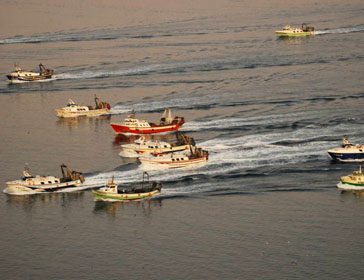 According to the World Bank and the FAO (The Sunken Billions revisited, 2017), global marine fishing loses account for US$83billion each year, but this figure could be reversed if correct management measures were applied. Along the same lines, the recent study Exploitation and status of European stocks conducted by Dr.  Rainer Froese on behalf of Oceana, shows that catches could increase by up to 57% (or 5 million tonnes) within 7-10 years, if fish were managed sustainably and based on science.

Historically, subsidies have contributed to boosting the EU’s fleet capacity by massively funding the construction of new vessels. As a consequence, the EU’s fishing fleet was estimated to be two to three times larger than sustainable fisheries would allow in 2008, even if many of the fish stocks in the North East Atlantic and in the Mediterranean were overfished.

Yet, despite the precarious state of the oceans, many European Member States continued to provide significant subsidies to support their fishing sectors. These subsidies  contribute to such strong economic incentives to continue overfishing that reducing them is one of the most significant actions that can be taken to combat it.

The negotiations of the new fisheries fund started in 2011 and provided the perfect opportunity to eliminate these environmentally harmful subsidies to the fishing sector and change the course of European fisheries. The agreed €6.5 billion fund will be spent on restructuring unsustainable fishing practices and implementing the CFP for the period of 2014 – 2020.

Previous fisheries subsidies gave priority to short-term economic interests at the expense of sustainable growth, using taxpayer’s money to increase fleet capacity and fund overfishing, However, the final agreement reached in 2014 showed a move away from this model as the EU voted to shift spending towards beneficial sustainable measures, such as tougher controls and data collection.

Even through the 2014 – 2020 European Fisheries and Maritime Fund (EMFF) is a big step in the right direction, there are still existing provisions that could be harmful for the environment. The European Parliament and the Council of the European Union ignored the benefits of temporary closures and the risks associated with subsidies for new engines. Choosing to allocate subsidies for engine replacement is a dangerous move, as more efficient engines contribute to an increase in fishing capacity.

Ahead of the negotiations in the European Parliament and the Council of the EU, Oceana in Europe released a study in 2011 estimating the total expenditure in fishing sector subsidies in 2009 to have amounted to €3.3billion. This estimate is three times greater than the amount that is typically quoted in public figures. In 13 countries, subsidies exceeded the value of their total fish catch.

In 2013, Oceana released another study, this time looking at state aid – the hidden subsidies allocated by Member States to their fleets between 2000 and 2013. The estimate totaled €4.9billion, of which only 1% was identified by Oceana as beneficial to the marine environment.