Yesterday we decided that four of us would go visit the indigenous Garifuna communities in various parts of the small keys, with the object of documenting their traditional way of life and sustainable exploitation of the waters that surround their villages.

To document the daily life of the community we wake at five in the morning, prepare the filming equipment and go to the dock just as dawn is breaking. The gray of the sky gives way to blue, then orange and finally to the yellow of day, despite the clouds. 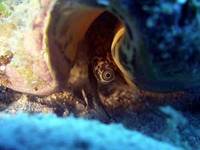 We wait for Elías Aguilar to bring us to Cayo Chachahuate. Children from this key and others are sent off each day in tiny boats to the community’s school, which sits on the eastern end of Cayo Mayor. The boats are like inter-island school busses. Finally we hear from Elias that, because the night before had been windy and the water today is rough, the kids don’t have school. So there is a change of plans.

The wind picks up; even from shore we can see the currents it is creating. A brown pelican takes advantage of the opportunity to show off his first catch of the morning. In a razor-sharp flight, almost touching the waves, he locates his breakfast and, seconds later, with an unorthodox landing, plunges his head into the water and captures his prey. He’s so close to us that we can see the last thrashes of the fish in the pocket of his beak. This show alone is worth the painful early morning.

It starts to rain – slowly at first, but a few minutes later the rain is intense. We decide to postpone our trip, but despite the bad weather the divers will do the dives they have planned for this morning. They take extra security measures and head out for Cayo Gallo.

The dive is at 16 meters, and the water is turbid because of the storm: the torrents carry sediment and other matter that remains suspended in the water, which makes it harder to see species. Even so we manage to find a giant hermit crab that carries an enormous queen conch as its “house.” It is an area of dispersed sea grass, mostly turtle grass but with a wide variety of brown and green algaes — Ditctyota spp., Halimeda spp., and an endearing plant Mar has baptized “chupachups.” More officially, it’s known as Rhipocephalus phoenix.

Gradually the weather improves, and we head toward the northern point of Cayo Menor, where we find, among other species, blue tang feeding on algae and a few groupers, like the Nassau grouper and black grouper lurking in the landscape of crevices and caves. When we try to film a Nassau grouper, a hogfish swims out from behind it. There are also lots of blue chromis and fairy basslets.

This area harbors a range of gorgonians – especially Plexauridae, sea plumes and whips – and a few lettuce, star, elliptical star,  flower and maze corals. It is also rich in barrel, black-ball, tube and vase sponges.

In general, as has been the case in all of the dives, the coral seems to be in good shape. There are only a few broken elk and stag horn corals, possibly as a result of Hurricane Mitch, a few with signs of bleaching, others with white-spot disease and a few gorgonians with aspergillosis, an infection caused by a fungus that creates lesions.

The weather precludes another trip in the afternoon, so we use the time to fill the tanks with compressed air and to clean all of the equipment thoroughly. We also prepare and edit images and footage since we are expecting several Honduran journalists tomorrow, who are coming to document Oceana’s Ranger expedition.