After my latest night guard duty in this Atlantic crossing, I have been able to sleep a few hours before Nuño and Carlos played the bugle.

The truth is today we all were able to sleep in. Before we arrived in Horta (Island of Faial) we cleaned the deck area and the messroom, something we were not able to do the last few days, because bad weather and the poor conditions of the sea kept us from doing it. 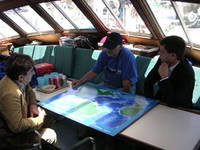 After an uneventful entry to port, we docked at the Marina in Horta, next to the oceanographic and fisheries research boat, belonging to the regional administration.

Upon arrival, we were greeted by representatives from the government of Azores; among them, Luis Fernandes, Regional Fisheries Director and the Director of the Department of Oceanography and Fisheries, Dr. Ricardo Serrano Santos, in representation of Azores University.

It is interesting to point out that, in the case of the Automous Government of the Azores, fisheries management is not part of the Regional Council or Secretariat of Agriculture, as it happens with the Spanish Autonomous Communities that duplicate the central government structure. In Azores, Fiheries is an integral part of the “Environment and Sea Coucil” (” Consejería de Medio Ambiente y Mar “.). This is a progressive decision in regards to the marine environment, because the fishing activity is integrated to the environment and this allows regulating fishing activities depending on its impact and not exclusively on interests around extraction. 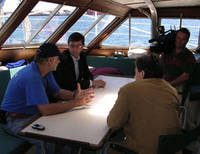 It would be very interesting if the Spanish Automous Communities-and of course the central government as well-began to advance towards this kind of government structure, which recognizes that the environment does not end at the horizon, but that the ocean and the marine floors also deserve environmental consideration from the Administration and that they must not be considered exclusively as areas to extract fish, no matter the consequences.

The University of Azores is a key institution for the study of underwater mounds. Last week, the university held a meeting-at the old whaling plant’s reconditioned facility in Faial – with the participation of the most prestigious international researchers on this subject, who came from Portugal, France, Germany, United Kingdom, Ireland, Israel, Canada, United States, New Zealand, and Australia. The international experts met to present chapters of a book titled “Underwater Mounds: Ecology, Fishing and Conservation” to be published in 2006 by the scientific publishing company Blackwell Science, from Oxford, in the series on Fish and Aquatic Resources.

Underwater mountain researchers expressed concern for the practically irreversible deterioration that bottom trawling has caused on the fragile ecosystems in these areas of great depths. 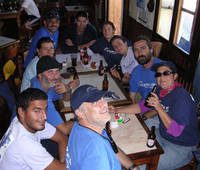 Dr. Serrano Santos himself has been part of a group of scientists who travelled to Brusels to support the Coalition’s position for the Deep Sea Conservation Coaltion in Protection of the Marine Floor (DSCC) of which Oceana is a part and that is requesting a moratorium on bottom trawling practices in the high seas.

The meeting we all attended onboard the Ranger, between Government representatives, the University of  Azores and Oceana was filmed for Azores television and parts of it were reproduced for local news.

In addition, the Azores congressional representative before the EU Paulao Casaca, a politician particularly active in the protection of the waters in Azores and against bottom trawling, wrote a welcoming message for the Ranger, which he sent to us from Brussels and distributed it among the archipelago’s communications media.

Once formal meetings and arrival proceedings to Portugal were resolved, the crew made it an urgent matter to go straight to Peter’s Sport Café, for many years an oblilgated stop in Horta, frequented by crews of ships arriving at this port after long voyages. A few beers helped us recuperate and from there, we headed for the showers.