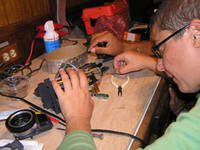 Mar remained onboard the Ranger this morning, cleaning the case that protects her video camera while under water. When we came back to our home base operations in Green Turtle Cay after our daily dives, we found her patiently examining each of the case parts: screws, pressure joints, bolts, handles, 32 sealed tight devices…fortunately, when the humidity alarm went off yesterday, she was still floating on the surface, filming the other two divers from the water: Houssine and Sole as they prepared their diving gear. Making use of swift reflexes, Mar took off her jacket (floatability control; in diving it is just called jacket) and asked Brendal to grab the camera, and screamed at Houssine: “No, don’t jump!” “The camera made water”. When she opened the tightly sealed case once onboard, a flow of water came out, seting off the alarms again.

During an expedition, you have to face many adversities, but above all, you have to keep calm. Just as if you had seen sharks. When the initial camera incident had passed, Annie Compton began making phone calls to purchase another camera of similar characteristics in New York, mobilizing all her contacts in that city. We had to delay our departure from the island of Abaco for another two days, but we are happy to know that a new camera will arrive tomorrow, Saturday. The other good news is that the accidented camera may be saved, after Mar places it in intensive care. 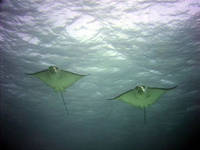 Well, today only Houssine and Sole went for a dive. Yesterday, the diving team met up with sharks as they were returning from Coral Caverns. Sole had run out of batteries. And everyone had little oxygen left in their tanks.” I had not noticed their presence, and suddenly, when I looked up I saw a white shadow with an immense jaw and several remoras attached. Before I could react, the shark saw me and hastily swam away”. Meanwhile, those of us onboard the ship could see them surrounding the boat where Brendal was, passing again and again underneath…Today, it is a different matter. It was two rays who waited for Sole and Hussein, specifically; they were two Spotted Eagle Rays, (Aetobatus narinari) who waited for them as soon as they jumped in the water, in the area of Coral Cavers where we decided to concentrate our efforts. And so did the sharks.

The Sandtiger shark (Carcharhinus leucas) like the one we filmed yesterday, was among the species with worse fame. It can be found in very shallow waters of just one meter deep, and even go into a river course. 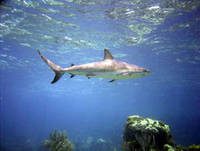 While we waited for our companions, Ricardo continues explaining: “Since they have no hands, fish use their mouths to identify objects and other living beings they find on their path. It is their sense of tact. If they touch a gudgeon fish it is not a problem, but if they touch a Sandtiger shark, that changes things. They are very curious animals and most accidents occur because of the need they have to touch the strange “animal” they have in front, with their mouths.

We also learned that the shark’s sense of smell allow them to locate minute concentrations of substances in the water, like blood. Or those produced by fear in human beings. In addition to their sense of smell and sight, sharks have a system of electric sensors located under their nose (called Ampullae of Lorenzini) which detects electrical waves produced by living beings underwater. Our divers swim with certain calmness among sharks. The first rule if they find one in front of them is to keep calm. Mar says sharks perform a kind of dance: they first zig- zag, then they arch their backs and finally, they shoot out like in a sprint race.