Sole threw herself back into the water today to continue the cleaning of the hull and to take a few photos of its current state. Nuno, our captain, gave her precise instructions about the area and parts to check. “Today I asked here to examine in detail the mileage log, a tiny propeller that records the speed of the boat and the distance traveled, as well as to continue scraping off the rest of the algae that has become attached during our long tropical sojourn.” All of the precautions are detailed, since we only have a few days left before leaving Harbour Towne Marina, in Fort Lauderdale (Florida). 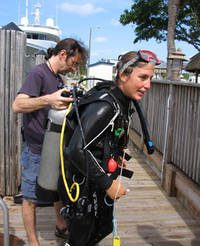 Before doing anything else, Sole checks her camera. Especially the waterproof case that will protect it. First she removes the rubber that seals the case and greases it with sort of transparent silicone. “This is so it doesn’t dry out” – she explains to me – “and so water doesn’t get in.” Apparently it is advisable to repeat this operation every three dives, more or less. “It’s been a couple of days since I’ve done it, so I’m going to give it a good going-over.” She also makes sure that the rubber has no cracks, neither a scratch nor the smallest flaw, since that could spoil the camera and ruin the objective of the dive.

Then, immediately before diving, she checks all the dive gear. Once she is perfectly equipped in her neoprene suit, she checks the brush and scraper, each attached to a cord and hanging on either side of her body. They will be her work tools under water, where she will stay for one hour. For Sole, diving in turbid, cloudy water, as the water of ports generally is, fighting with a brush and scraper to detach algae and barnacles is evidently not her favorite thing. “Swimming in filth to scrape filth” – that’s how she describes this part of today’s work. But she knows that this is part of her mission on the Ranger and she takes it on with determination and a smile, between the jokes of her colleagues Mar and Houssine, who have helped with the preparations. “If something comes up and I have to get out of there, warn me with three knocks on the hull,” she and the captain agree before she disappears below one of the Ranger’s pontoons.

Soledad Esnaola is 24 years old and is a rescue diver. She has studied marine biology and completed postgraduate work at the University of Queensland (Australia), specializing in cetaceans. She works for ZOEA, the dive and marine research organization that has collaborated with Oceana since the beginning of the Transoceanic Expedition. Sole has been on board almost since the boat began its journey and still she has a few more months on the Ranger left.