Sighting of cetaceans and marine birds during the crossing of the Atlantic. Friday, June 10th, 2005

The Oceana Ranger’s Transoceanic Expedition represents a magnificient opportunity to enjoy sightings of different species of cetaceans and marine birds. During the crossing of the Atlantic, between April 21st and June 9th, 2005, we were able to observe, and in most cases identify, diverse species of cetaceans and birds that, although a bit scarce in terms of numbers of individuals and species, it resulted interesting enough to us, in most cases.

Considering that the objetive of the Oceana Ranger research in this crossing is not to register or investigate any of the groups ( cetaceans and marine birds ), sightings were done at random and without methodology.

In addition to the above, it must be pointed out that work conditions ( visibility and ocean climate conditions ) made it truly difficult to identify species in certain occasions.

Below, we indicate most species we considered to be of interest, including both marine birds and cetaceans. 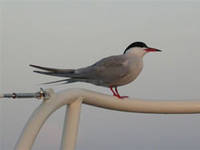 Monday, May 16: at 170 miles NE of Bermuda, we sigthed a Great Skua ( Catharacta skua ). This robust bird, similar to a seagull, large and of brown color, was hovering over the Ranger for two consecutive days. 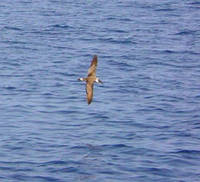 Wednesday, May 18: Blue Whale ( Balaenoptera acutorostrata ). It is the smallest of whales. This, together with the blow hole, the coloration on the back and dorsal fin-relatively large respects to the size of the animal-helped us to identify the specimen. 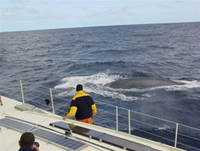 Thursday, May 19: Blue Whale ( Balaenoptera musculus ). Although the sighting of any cetacean in the middle of the ocean is always an indescriptibable experience, contemplating a blu whale swimming next to the hull of our ship goes beyond any expectation. The whale measured 12 to 14 meters long, so it was not an adult ( blue whales are the largest animals on the planet, reaching up to 30 meters in length and weighing  150 tons). This observation was confirmed by its ” daring ” or ” curious ” behavior, sometimes swimming between the two hulls of the Ranger. It literally breathed in our faces. It had a characteristic pigmentation and its body was conspicuously covered by spots. On the other hand, the very small dorsal fin ( almost vestigial ) and the form of the head left us little doubt. 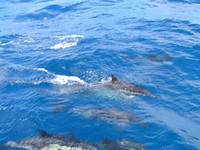