8:00 a.m. The crew is ready to begin the day. We have to move the Oceana Ranger to the site where the press conference will be held, at Bayside Miamarina (right in the center of Miami, the immense Latin metropolis of the United States where if you don’t speak Castilian it almost seems strange). The port captain, Juan Ginarte, comes by to guide us there. With us is Doralisa Pilarte, Director of Communications for Oceana North America, who has organized this meeting with the press.

10:00 a.m. During the press conference Carlos Pérez, first mate of the Ranger, and Ricardo Aguilar, Director of Research, both speak. I wait until the end to refer the journalists to Ann Compton, because of the special importance her presence aboard the Ranger has for Oceana. Without Annie and her husband Stephen McAllister, member of Oceana’s Board of Directors, the Expedition from the Pacific to the Mediterranean would not have been possible. Or at least not so soon. 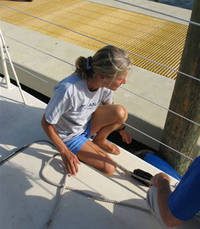 They are the owners of the catamaran which they have so generously put at Oceana’s disposal. McAllister (who knew Xavier Pastor from earlier projects and work in defense of the marine environment) mentioned that he had a boat and wanted to give it to Oceana. Xavier, of course, seized the day. Hardly a year after their first conversation, the Ranger is a dream become reality, with twelve crew on board, of many nationalities and many talents. We are biologists, telecommunications engineers, photographers and videographers, divers, journalists… The ocean is our life. And when we are not on the boat, we are in Oceana’s offices, driving projects to guarantee effective protection of the seas.

Among the press that come to see the Ranger off is a camera from Miami’s Channel 10, as well as journalists from the Miami Herald and the Florida Sun-Sentinel, accompanied by a photographer. Taimy Alvarez, the Sun-Sentinel photographer, stays to talk with us for a moment. “It’s sad to see the change in the oceans between the time I was young and now,” she said. “Before there were many more fish.” The daughter of Cubans who relocated to Miami, she knows what she’s talking about, since “my father is a fisherman, he named me after the movie `Taimy, the sailor’s daughter'” and, besides, since it couldn’t be otherwise, she’s a diver. She dives with her husband in the caves of northern Florida, “where only one percent of the world’s divers are licensed to go, trained by the National Speleological Society.”

While the photographers shoot, all standing on the catamaran’s starboard deck, I can’t get over how amazing it is that Oceana is working on a global scale to protect and conserve our oceans. Because while the Ranger expedition crew are talking with the American journalists, our colleague Cheryl Haro arrives from Oceana’s office in Santiago, Chile, where the Board of Directors has just met to design the organization’s next projects.  And we are all thinking of our colleagues in Europe who, just a few hours ago,  opened the International Symposium on Oceans  in Madrid – thanks to the cooperation of the Fundación Ramón Areces – a two-day gathering of distinguished marine experts. Among them, of course, will be Michael Hirshfield, Chief Scientist for Oceana.

We think of all of this with great satisfaction, because what we are telling the journalists on either side of the Atlantic is connected. Only one example: the lecture given by Professor Bernd Christiansen, of the University of Hamburg, will focus on underwater mountains (seamounts); and in a month and a half, if we stick to our current plans, the Ranger divers will be filming and photographing the flora and fauna of the seamounts of Gorringe Ridge, southeast of the Iberian Peninsula.

7:00 p.m. Goodbye to Miami. The Oceana Ranger sets sail from Bayside Miamarina, headed for Bimini Island in the Bahamas. We will be sailing through the night, will arrive tomorrow, Friday the 22nd, at dawn. And in the early morning Oceana’s divers will return to the water once again. The Transoceanic Expedition resumes its work, as captain Nuño says. 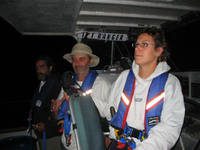 Once we’ve set sail from Miami, Carlos Pérez, first mate on board, convenes the crew to give a lesson on security and assign the night watches. We do them in pairs, in three-hour shifts, starting at six in the evening. David and Annie start. I’m with Carlos, from midnight to three a.m. It makes me feel safe, because Carlos is an experienced sailor. With a little luck, he says, maybe some of his knowledge will rub off on me. I go to bed to see if I can sleep a few hours.

11:50 p.m., Thursday the 21st. I wake to the sound of my cell phone alarm and am out of bed in a flash. It’s my first watch on board and I want to be on time. I throw on a polar fleece, in case it’s cold, adjust the flashlight at my forehead and hang binoculars around my neck. Before we go out to the cockpit, Carlos and I put on life jackets with safety rings. “The life jacket has an automatic safety device that, if you fall in the water, inflates, keeping you afloat and marking your position with a light.” 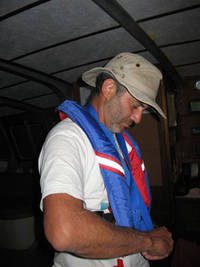 Whew – it’s a relief to know it!! We are not allowed to go out on deck at night without the jacket and, for my part, I only hope never to have to test it. We are both ready to relieve Indi, the cook, and Jose, sailor and dive-master. Their watch has been calm and I hope that ours will be as well. Out we go!

12:00 p.m. During a watch you have to scan the horizon continually, at the prow, the stern, to port and to starboard to ensure that no other boat is on a collision course with us. This is the first step. The second is to check the radar, which shows our trajectory and the presence of potential obstacles.

1:00 a.m., Friday the 22nd. Oceana’s catamaran is going, literally, like a shot. I agree with what Nuño told us some days ago, that the Ranger, specially designed for transoceanic sailing, is very sturdy. I’ve also heard Carlos say on various occasions that this boat is “noble.” From my limited experience as a deckhand, I’d say that she has a beautiful motion. It feels as if the Ranger is sliding gently, undulating to the measure of the waves, as if it were rocking us in a cradle. “Relax your knees and let your body take the rhythmic movement,” Carlos advises me, to prevent possible seasickness. Done. It seems to make things better. “It’s the Ranger swing,” my companion adds, with a knowing smile.

2:40 a.m. Our destination appears on the radar: Bimini Island, our first port of call in the Bahamas! The second will be a few days afterward, at Abaco Island. We’re going in search of sea turtles. This area is the natural habitat of five species. It is a mating and nesting ground. From a scientific point of view, Oceana is interested in all five species, since most complete a long migration into European waters. But we especially want to film a loggerhead (Caretta caretta).

2:55 a.m. The night has passed without event and the three hours of our watch have flown by. Carlos descends to wake the next pair, Ricardo and Bibi, our Galician mate from Cambados, who you know already from previous episodes. Although the captain is the only one not required to keep watch – his job is to be continually on call for whatever needs doing on the boat – he comes out to see how things are going. We are sailing at six knots, and if we keep it up we’ll arrive at Bimini (in the Bahamas) ahead of schedule, so we slow the pace to four knots.

When day breaks our diving team will return to the water once again, looking for turtles. For that reason they are not on watch. That is the other rule I’ve just learned: the day before a dive the divers are exempt from watch, as well as the day after. I don’t know about Carlos, but me, after such an exciting day – “I’m goin’ to bed,” as Bibi would say.