A mismatch story in the North East Atlantic

It all started in 2008 when OSPAR, the international Convention for the Protection of the Marine Environment of the North-East Atlantic, adopted its list of threatened species and habitats. This list, essential to identify key marine species in need of conservation measures, was the starting point of active conservation policies for restoring marine biodiversity in the region.

However, the intrinsic flaw of working with lists is their static nature and lack of adaptability. Worse is if you add in strong political resistance to updating or amending them in light of new scientific knowledge. You quickly end up with an obsolete tool, inadequate to inform decisions and address the right priorities. This is particularly apparent when dealing with marine biodiversity, which is known to be rapidly degrading as a result of natural and human pressures.

That is the story of the OSPAR List, which has not been updated since its adoption eight years ago, and whose scientific foundation has been questioned by Oceana. We’ve called on OSPAR to expand its list in order to reflect the full range of threatened marine species and habitats, and not only focus on the most iconic or least controversial.

In 2015, the first complete IUCN Red List assessment European marine fishes was released by the IUCN, a scientific evaluation that categorises species according to their level of extinction risk. This assessment compiles the most reliable scientific estimates of species status from the IUCN Species Survival Commission (SSC) and several of its species Specialist Groups. Oceana also collaborated on a number of species assessments. Beyond the detailed results of the assessment in itself, what is obvious for the North-East Atlantic is the wide gap between the OSPAR List and the 51 marine fish species that are currently threatened in that region. We have compared the two lists, and have found that:

– 78% of these threatened species are not included at all on the OSPAR List. 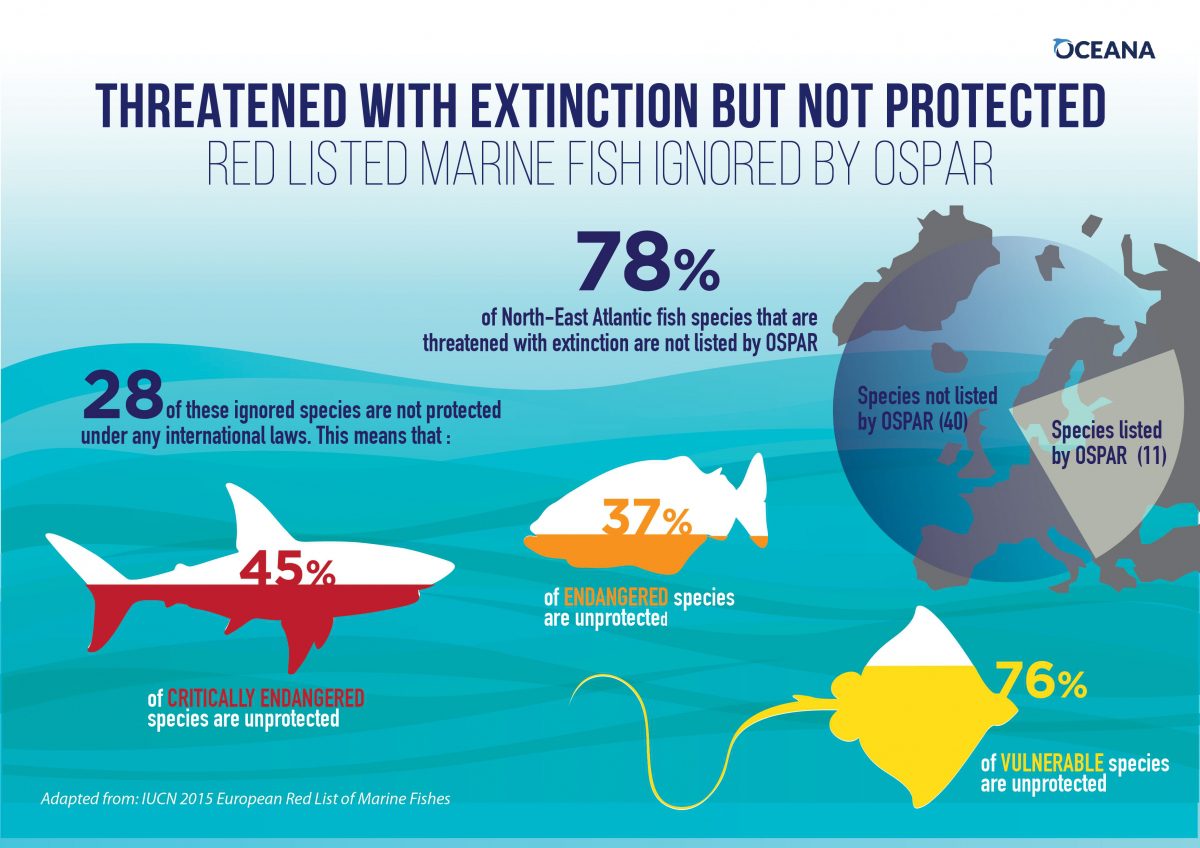 Across Europe, the most threatened fishes are the Chondrichthyans family (sharks, rays, and chimaeras), and in the North-East Atlantic, they also face an elevated risk of extinction, with 36.2% of species considered threatened.

– 26 threatened species of sharks and rays are ignored by OSPAR, among which:

It is clear that in the case of marine fishes, the OSPAR List of Threatened and/or Declining Species and Habitats neglects many North-East Atlantic species that have been assessed as threatened. As a result, OSPAR does not recognise them as conservation priorities, and so it does not grant them any protection. OSPAR has stated in the past that it does not intend its List to be comprehensive, and prefers to focus on those species that are not protected under other international laws. For many of the ignored threatened fishes, however, this explanation is insufficient, as most of these species are not covered by any protective measures whatsoever in the North-East Atlantic. OSPAR Contracting Parties have a responsibility to improve the status of threatened species and habitats in the waters of the North-East Atlantic. A basic step towards fulfilling this obligation means updating the OSPAR List, on the basis of the best available science, to recognise what could potentially be lost.

1 For example EU legislation, the Bern Convention, the Bonn Convention, CITES and other relevant instruments. Fisheries management TACs allowing exploitation were not considered measures of protection