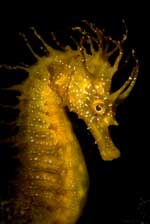 We found this little guy in Galicia, Spain during our 2008 at-sea Oceana Ranger expedition.

Here’s a fun fact about seahorses: the males are the ones who get pregnant and seahorse babies are born inside the male pouch.

But here are some not so fun facts about seahorses, which are fished for use in traditional medicines throughout Asia and aquariums: Overfishing, pollution, climate change and habitat depletion have severely depleted seahorse populations.

The 2004 CITES (Convention on International Trade in Endangered Species) convention provided international protection to seahorses  by setting a minimum catch size allowing them to reproduce while allowing some fishing – though Indonesia, Japan, Norway, and South Korea opted out of the trade rules at the time.

Oceana fights to create Marine Protected Areas to protect essential habitats that are host to such incredible creatures as the seahorse.