“Indi, run, come on, come on, drop everything!” shouts Nuno, the captain, from the cockpit. You should have seen how Jose Pañalver (that is, Indi) left the Ranger kitchen. Well, Indi and myself, of course. He was chopping vegetables to freeze in bags. I, across the room, was watching him while writing this journal, of which he will be the protagonist today. Airborne is an understatement. We didn’t know it, but outside a splendid osprey (Pandion haliaetus) was waiting for us, performing spectacular plunges in search of a tasty fish. 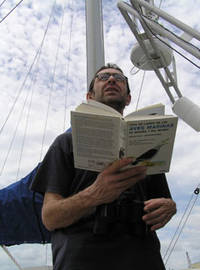 He didn’t manage to seize any in the short time we watched him, but the mere sight of him made us happy for the rest of the day.

Indi, besides being the Ranger cook, is a tremendous bird enthusiast. Along with cayenne pepper and flavoring for our rice, he has brought aboard the Ranger his binoculars and guides for the identification of species. “The rate of success for the osprey is less than you could imagine, it happens to all predators: whenever they aren’t looking for a catch they get one,” he explains when we return to the `messroom.’ Indi continues chopping vegetables. And I, the journal. “This bird is ubiquitous, you can find it in America as well as Europe. The sole of its claws has a special texture to prevent its prey, the fish, from slipping.”

Every day, very early, during our stay at Fort Lauderdale, Indi vanishes from sight. Among the species he has been able to see are the egret, the grey heron, and an anhinga, a bird of mangrove forests and humid coastal zones similar to the cormorant.

In fact, Indi considers himself a naturalist in the broadest sense of the word. We have already begun to call him “mama Indi,” for the wonderful job he is doing of feeding the expedition crew. To be on board the Ranger he is taking a leave of three months without pay from the hospital in Madrid where he works as a chef. Perhaps the patients notice his absence when mealtime comes, but the crew of the Ranger are enchanted with him.