While our diving mates were enjoying their non-vacation, Nuño, Carlos, David and I were working on fixing up the catamaran. Trim the rigging, change the halyards, check the sailing gear, shopping list, inventories, check communications … We began preparing the Ranger for crossing the Atlantic, and the closest passage to the Bahamas. 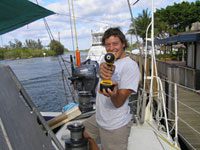 Now we have a new satellite communications antenna ready for surviving aboard our sailboat. We have also been able to place it a bit higher than the other one. This enables us to get better reception of the signal.

With the engines, we have begun by pressure washing the engine rooms. Then we proceeded to check the transmission, the cooling systems, unscrew, screw back on, take out hoses, put them back in, change filters, check pumps … you know … we’re still at it.

Another no less important task on board has been checking all of the safety gear. Buying new kits with flares, rockets and signal mirrors, preparing two abandon ship bags (in case of shipwreck) where we have gathered basic items for survival at sea (first aid kit, flares, rockets, flashlight, food in rations…). We have also designed an organizational chart specifying each crew member’s duties in the event of abandoning ship or fire. 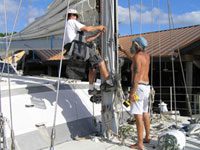 It has taken us some time to go over the first aid kit; checking the medication we have, expiration dates and the little items we need to buy to complete our little pharmacy.

In the last few days, we have received quite a few new items such as the dinghy with its engine, a new storm jib (as its name suggests, it is the jib or prow sail for storms) a survival raft, vests, flares, rockets, fire extinguishers, books of charts, nautical charts… as well as the things we have sent away for repairs such as the green Genoa, water pumps, a dinghy or the mizzen on which new travelers have been placed for the new system that has been installed on the mizzenmast.

At the same time, new crew members have gradually been joining us. Aboard we already have Paloma, Ricardo and José (better known by all as Indi), who have quickly gotten down to business to set the next projects into motion.