Everyone aboard, the Oceana Ranger heads for the dock at Cayo Cochino Menor. We have barely been docked five minutes when  the launch “Tiburon” arrives with the journalists from Channel 7, of the Honduran television show TeleCeiba. During the presentation of all the equipment we tell them all about the Ranger expedition. 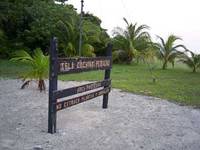 This morning we’ll go out with the Ranger to do a study of hydraulic parameters of salinity, oxygenation, temperature and turbidity. We will use a Secchi disc to measure the transparency of the water; the rest of the data will be taken with a multi-parameter probe. We will also undertake a study of the currents using a drifting buoy, or currentmeter, which consists of two buoys that support a panel of canvas that hangs downward because it is weighted on one end. We will be accompanied by park scientists.

After we’ve eaten, part of the team goes diving in the small paradise we have here just in front of the area designated for the science station, the marine prairies in which, our first day here, we were so delighted by the richness and variety of life.

The grunts (Haemulidae) seem to be lazily awaking from a nap. Between the sea grasses and the reef we find a multitude of tiny larvae, a few donkey dung sea cucumbers (Holothuria mexicana), banded coral shrimp (Stenopus hispidus), yellowline arrow crabs (Stenorhynchus seticornis), reef urchins (Echinometras viridis), bearded fireworms (Hermodice carunculata), a giant anemone (Condylactis gigantea) on a gorgonian and various species of parrotfish (Scaridae). But we can’t see much more because a force 5 wind picks up, which makes diving difficult and significantly reduces visibility underwater.

The other half of the team undertakes the boa constrictor monitoring project – the boa constrictor is an endemic snake species in the Keys. This activity happens at least once a week. The trail to the highest point on the island begins behind the canteen, where we gather enough water for the trip. Immediately we enter a dry forest of Encino trees, a type of oak, the fruit of which are small, velvety acorns. Ficus trees growing on other species, bromeliads growing on the ground and on other trees, as orchids do. The tree commonly known as the “tourist tree,” because its red bark peels in thin strips, is one of the most dominant. Innumerable species of trees and bushes surround us. But the thing that surprises us most during the hike are the small and large hermit crabs called “coconut crabs.” Reptiles like the chameleon, on their throat shines a blue spot, or in some cases red, that functions as an advertisement during the mating season.

We find a boa constrictor perfectly camouflaged in a small Encino. It looks like part of the bark. Its colors are clear browns, it is almost one meter long, weighs 450 grams, and is a female. We attach the microchip. Each of the monitored boas has one. This allows detailed monitoring of the growth, development, movement and behavior of the specimen. 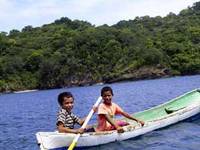 Along the beach we can see the Caribbean palm trees, most of them affected by the disease called “lethal yellowing,” caused by a black beetle that carries a virus from which the trees, once they have been infected, can not recover. They remain standing, empty of life and losing their leaves, the trunk of the palm pointing in a fragile lament toward the sky. Other species that inhabit the beaches are ocean almonds and ocean grapes.

It is almost night, and we return to the project base by circling the island, walking on the shore. We can look back on a spectacular landscape; the abrupt emergence of the Key gives it a hardness hidden beneath the thickness of its flora.

In the darkness of the night it is almost impossible not to trip and catch your feet in the holes the crabs have dug. The Keys have as many surprises above the water as beneath it.