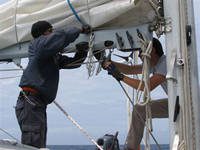 12:30 a.m. Bermuda emerges magnificent in the middle of the North Atlantic, like a wavy line of rolling, green hills. There it stands, at a place with nothing around for hundreds of miles- except deep waters reaching down 4.000 and 5.000 meters- its sighting brought comfort to the Ranger’s expedition members. It has been five days of travel since we left Bahamas, as a storm began to form and threatened to reach the catamaran, keeping us from carrying out the dives we planned for the Sargasso Sea, at least for the moment. Quite frankly, we all look forwards to going ashore.

Although many people know it as the Bermuda archipelago, its residents just call it Bermuda, as if it were only one, indivisible island. And it is. Observing the nautical chart our captain uses, we can see it quite well; Bermuda is an almost perfect circle. The southern part is elevated, forming a figure in the shape of a hook, measuring about 30 square kilometers, while the north side is submerged and forms an immense coral reef. In the middle of this gigantic ring are superficial waters; outside of the circle, the deep ocean. 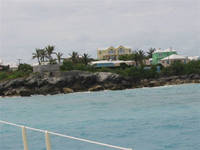 Bermuda is the crater of an ancient underwater volcano that emerged in the Pleistocene era, during inter- glaciar periods. It is part of an underwater mountain range; several mountain tops are submerged, such as those called Plantagenet Ridge, situated further south, rising 5.000 meters from the sea floor and barely 40 or 60 meters from the water surface. Now, let’s look at a simple map of Bermuda. What we see is a succession of different islands (the emerged areas), joined together through bridges.

For years it was called Devil’s Island. The writer Mark Twain said it was “the smallest, longest place in the world”. It is also the northernmost spot (32 degrees north latitude) reached by the distribution of tropical mangroves and coral reefs. This is under the mitigating effects of Gulf currents which produce a more tempered climate.

The Ranger arrives in Bermuda through the island of Saint George. We first go to customs, to do the corresponding administrative errands and after docking, some of us go ashore on the auxiliary boat. At the town hall square, there are some artifacts on display, old torture gadgets used to publicly penalize criminals. There is a British ambiance in the island, in the houses, the people and traditions. Over 300 years after the first English people came here (victims of a shipwreck), Bermuda continues to be a territory dependent from the United Kingdom, debating between following independence partisans or continue to subscribe to Her Majesty’s Gracious Crown.