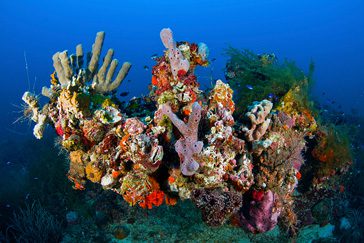 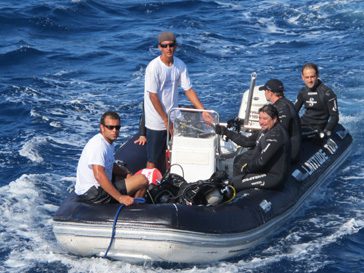 We performed two half-hour submersions at a depth of thirty meters, separated by about 5 miles and a three-hour rest. Today’s dives carried a certain degree of risk. They were very far from the coast, and in addition to that, the sea and wind became choppy at times. The rocking of the Latitude, a ship that was paradoxically built in Germany to work on the challenging North Sea to support the oil rigs, made it impossible to lower the large auxiliary launches. Therefore we had to work with the Latitude Too, a powerful semirigid inflatable boat that was easier to place in the water. We have taken all possible precautions to prevent divers, when they surface, from being dragged by the current before we could detect them. We added a large anchor buoy to their personal signaling buoys. It is tied to an anchor by a line by which the divers rose and descended. All of these precautions have proven to be justified because the wind, waves and current have significantly hindered visibility of the divers’ signaling buoys and retrieving them. 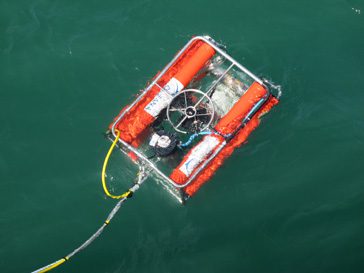 Hoisting the rubber boat on board was also an arduous task because of the waves and wind. It was finally achieved; not without effort by the entire crew and some alarm. Finally, when all the people and equipment were safe on board, we started the journey to Port Saint Joe, a small Florida coastal town where tomorrow we need to pick up the replacements for the damaged ROV parts. It’s more than 100 miles away.