La Isla de Coiba is the largest island in the Central American Pacific – approximately three times the size of Manhattan, or twenty times larger than Coco´s – and only 12 miles off the coast of Panama. It is the site of the Central Pacific´s most extensive coral reef system; a feeding and calving ground for blue whales, humpback whales, orcas and tropical spotted dolphins; and home to sharks, manta rays, billfish and tuna. Four species of threatened sea turtles nest on Coiba´s beaches. Crocodiles patrol its mangrove-lined shores. On the Panamanian mainland the island is famous, but not for its biological richness. For the past century the word “Coiba” has inspired fear. 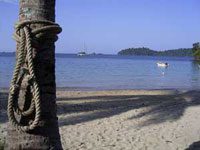 Until last year Coiba was a federal prison. Panama´s most dangerous convicts were sent here – dangerous either to society or to the prevailing political regime. The jail was dispersed, with prison camps at various points around the island, and further dispersed because, according to legend, the prisoners were given leave to roam the island at night… while prison guards and timid inmates locked themselves in. Violence was a fact, not all of it perpetrated by man; in addition to the crocodiles, 15 species of snake, including lethal fer-de-lance and coral snakes, live on Coiba.

The prison population gradually dwindled as the twentieth century came to a close, but still The Panama Guide (Second Edition, 2001) warned visitors that “due to the continuing presence of the penal colony the safest place to anchor is off the biological station located on Punta Machete on the northeast tip of Coiba… The police are very friendly and if you want to go on any island trails one of them, equipped with weapons, will go as a guide and protector.” Of Jicaron, a smaller island in the Coiba archipelago (in addition to Coiba the group includes eight smaller islands and 40 islets), the guide writes: “This island, separated from Coiba by a wide channel has strong currents which make it safe from any lurking fugitives. No one lives here and the beauty of the lush landscape can take your breath away. We rated Jicaron as the most wildly beautiful stop in Pacific Panama.”

Others have been drawn to Coiba’s beauty, and the history of the island has not all been dark. A Smithsonian scientist, Alicia Ibañez, has been living and working on the island for several years, attended by a guard and assisted by an inmate, Mali Mali, who finished his sentence and stayed to continue work on the project. Today he is a government park ranger and the island´s most knowledgeable guide.

The prison closed for good with the evacuation of the last prisoners in July of 2004. No one knows for sure what crimes led them to Coiba, what in human life has been lost in the island´s past. In any case the inmates, collectively, have repaid a debt: their presence has kept this place almost completely immune from industrial degradation. Coiba and its archipelago were made a national park by decree in 1991, and last year the park status was made law.

Preserved as it is, Coiba´s value is immense – particularly because of the island´s marine life. Coiba is a key link in the Pacific island ring that includes Coco´s and the Galapagos, and, as the member of the group closest to the continent, a protected nursery for juvenile fish that will migrate as adults. Keeping Coiba´s marine ecosystem intact, therefore, is critical to maintaining tuna and billfish populations that are fished and consumed all over the world. 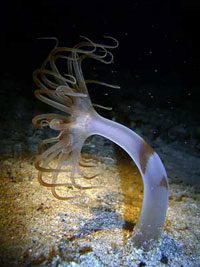 On a more local level, Coiba should continue to provide for coastal Panamanian communities. Small-scale fishing is an ancient activity in Panama; the word “Panama” actually means “abundance of fish” in an indigenous language, and while the moniker no longer applies to nearshore areas invaded by industrial fleets in the 70s and 80s, it still fits Coiba. Under the new park rules small-scale fishing will be allowed here under close regulation. All boats must apply for a permit at the ranger station. Legal gear is one line and three hooks – sufficient to fish for a family or small community but no more. The hope is that Coiba can continue to support local fishing while also providing a marine nursery ground that will help to replenish fish populations along the more heavily-fished coasts.

The transformation of Coiba from prison colony to national park is new and happening now. On Wednesday the first class of Coiba Ecological Police will graduate from their training course and take up a permanent presence on the island. They will collaborate with the park rangers and with MarViva to enforce the new fishing regulations, which went into effect this weekend. Yesterday, for the first time, the park rangers collected miles of longline from two of four boats that had requested permits to fish in the park; the other two decided to leave park territory rather than relinquish their illegal gear. Tonight a MarViva/park ranger/ecological police patrol will head out to circle the island. With the change of the Panamanian government in September there is a new administration in power and Coiba´s rangers are all new, so for this first run Rolando Ruiloba, director of Coiba National Park, will accompany them to supervise. Mar will be there to film and I to write. Needless to say, the Ranger could not have chosen a more important moment to arrive.