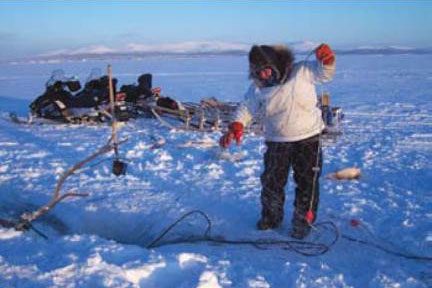 We are incredibly saddened by the passing of Caleb Pungowiyi, a longtime Alaska Native leader and Oceana’s Senior Advisor and Rural Liaison.

Originally from the St. Lawrence Island village of Savoonga, Caleb’s work was a critical part of Oceana’s accomplishments in Alaska. He was a passionate yet incredibly humble person who followed his beliefs and led by example. He cared deeply about protecting and nurturing the subsistence way of life and the environment that was his garden.

Caleb’s decision to work for Oceana was not easy, but once he learned more about Oceana’s work, he embraced us, helped guide us, opened many doors for us, and worked to break down mistrust of outside organizations.

Prior to joining Oceana, Caleb held many positions, including president of the Inuit Circumpolar Conference, an international organization that advocates for indigenous people of the North. We are very lucky that Caleb brought his experience and friendships in the Arctic to Oceana.

It was hard to travel anywhere with Caleb where people did not know him. People would often stop on the streets of Anchorage just to come say hello to him, and, more than once, we heard stories about his prowess on the basketball court. His humble, quiet nature, deep passion for subsistence, gentle smile and contagious laugh will be greatly missed. Our thoughts are with Caleb, his wife Gladys and their family.

You can also read an interview with Caleb Pungowiyi from the summer 2008 issue of Oceana’s magazine.