During the night of the 13th of March we had very good wind and were able to sail for several hours. With a wind speed of 25-30 knots and only the jib up we went at 9-10 knots. It was a wonderful feeling after so many hours traveling by motor – since until now we have had only headwinds or no wind at all.

First thing in the morning, we saw a flying fish (Hirundichthys speculiger) of almost 25 centimeters that had landed on the deck.

It was apparent that on one of its flights it had chosen an unfortunate direction and ended up on the catamaran. Sometimes it’s interesting to stop and look at the meaning of scientific names to see how it is that we have come to name a species. “Hirundichthys” roughly translates to something like “swallow fish.” 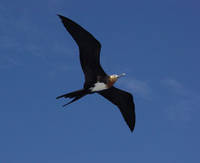 During the rest of the day we found ourselves in much the same position we’ve been in since we left the Panama Canal. We didn’t see a single boat along our route, not a single dolphin, and only one pair of frigate birds (Fregata magnificiens) approached our stern.

In the afternoon, when we found ourselves between Guanaja Island and the Honduran coast, we noticed that, less than half a mile away, the sea was boiling. In a little while we saw a shoal of tuna mounting an attack on another school of small pelagic fish. A few gulls arrived at the site to take advantage of the flurry and to profit from the hunt.

The distraction didn’t last long and we continued on our way toward La Ceiba, which we reached by nightfall.

In the morning we had the chance to enjoy the scenery of the port, encircled by mangroves and by gorgeous mountains completely covered in tropical vegetation.

While we toiled to clean the boat and get rid of all the saltpeter, there were, all around us, hummingbirds, butterflies, toads, beetles the size of a fish, black mangroves (Avicenia germinans) nearly 20 meters high and everything else one could hope to find in this ecosystem. And among the roots of the mangroves a multitude of young fish, one or two cichlids and angelfish that swam back and forth from our hull to the mangrove forest.