After three days of sailing, the wind dropped below 10 knots, and we were forced to use the motors again. We alternate between them every twelve hours so they make the same effort and we can balance the use of fuel in both hulls (in the three days of navigating by sail we saved 600 liters of fuel). 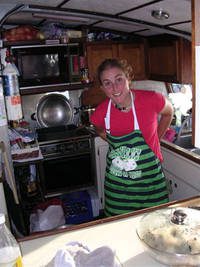 Throughout the day we have sighted several groups of dolphins (we have not been able to identify them from the distance) and while I write this journal entry we observed a group of delphinids we believe to be Killer Whales (Pseudorca crassidens).

Indi had a free afternoon and Sole has been in the kitchen for a couple of hours preparing dinner for the entire crew. It is chicken fajitas, which extended its aroma throughout the messroom and part of the cabins.

We have advanced 15º in coordinates of longitude, which means that if we continue traveling to the East, we will have to move the onboard clock one hour ahead. We will do this until we complete the crossing.

We alternate our daily chores with conversation, reading, (book trade is a daily occurrence), revising photographs gatherd throughout the expedition, and playing boardgames.

Nuño, Alicia and Carlos are waiting for me for a card game. We have a couple of hours until my guard duty begins at 12.