The Baltic Sea is faced with many threats, prompting Oceana to conduct several expeditions to gather biological data, and better protect the Baltic ecosystem.

Our team of specialists works in the Copenhagen office to protect this unique sea, which covers 377 thousand square kilometres in the North of Europe and is almost entirely surrounded by nine different countries, from IUU fishing and improve the network of Marine Protected Areas. It is a very shallow sea of “brackish” water, water that is less salty than seawater but saltier than fresh water. It receives salty water from a limited exchange with the waters of the North Sea through the Kattegat and Skagerrak and fresh water from more than 200 rivers. The Baltic is rich in biodiversity and species, adapted to those conditions. 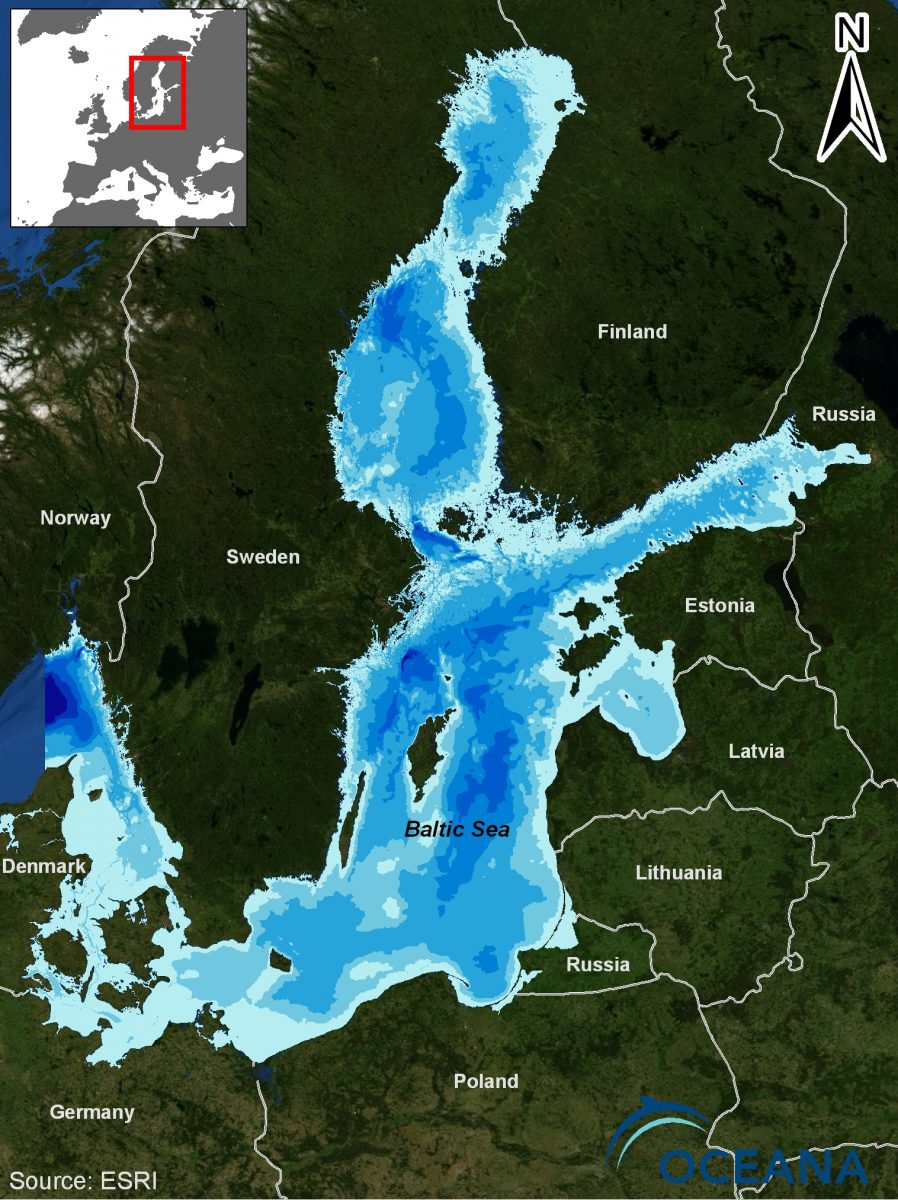 Unfortunately the Baltic is at the same time one of the most polluted seas in the world, due to exploitation and economic activities. Unsustainable fisheries are one of the most urgent threats to the Baltic fish stocks.  Destructive fishing practices, like bottom trawling, high levels of by-catch and illegal, unregulated and unreported (IUU) fishing all lead to the degradation of the marine habitats in the Baltic Sea.

An overview on the threats to the Baltic ecosystem was recently published by Helcom, the Helsinki Commission. Besides destructive fisheries, other threats to the Baltic ecosystem include eutrophication, caused by nutrient and phosphorus inflows from industrial agriculture all around the Sea and leading to toxic algae blooms, and the inflow of toxic substances from industrial activities, like dioxin and Persistent Organic Pollutants. Furthermore the seabed is also damaged because of construction works like dredging.

Fisheries in the Baltic

Overfishing and destructive fishing practices like bottom trawling represent a major threat to the Baltic ecosystems. In 2008, fishermen from all the surrounding countries caught more than 50 different fish species in the Baltic, for a total of 742 thousand tons of fish. Finland, Sweden and Poland are the largest Baltic fishing nations. Sprat and Herring are the main targeted species in the Baltic, representing 85% of the total catches. They are often caught by industrial fishing vessels and used for the production of fish meal. Cod, flounder, perch and salmon are other important Baltic commercial species. Fisheries in the Baltic outside the 12-nautical-miles zone are mainly managed by the European Commission, however Baltic countries manage fisheries inside the 12 nautical miles and can adopt management measures for their entire own fleet as long as they are more stringent than the current EU law. Fisheries management is poor in the Baltic and most of fish stocks, assessed by ICES, are overfished and even fall outside the safe biological limits – a status that is far away from sustainable fishing.

The use of unsustainable fishing gear poses large threats to the Baltic marine ecosystems as well as the discarding of unwanted bycatch. Bottom trawls are highly destructive because they effectively clear-cut every creature living on the seafloor.

Trawls and dredges use large, heavy nets kept open by metal doors, weighing several tons each, many of which are dragged across large areas of seafloor to catch fish that live on or near the ocean floor. As an example in the Baltic, bottom trawling is used for catching cod and flounder.

Apart from fish, thousands of seabirds and hundreds of mammals are killed in the Baltic every year, where they end up entangled in fishing gear. For grey seals drown in fishing gear is the most common cause of death. Driftnets have been banned in the Baltic, however gillnets and fixed fishing gear are causing great problems as well, these bycatch birds and mammals, and caused as a matter of fact a long-term population decline for common porpoise (Phocena phocena) in the Baltic Sea.

Marine Protected Areas in the Baltic

Marine Protected Areas are an effective way of protecting parts of the oceans from fishing and other maritime activities in order to give ecosystems a chance to recover. Nations agreed during the Convention on Biological Diversity protect 10% of the marine ecoregions by 2012. To achieve this goal, the European Union has built up the Natura 2000 network to protect terrestrial and marine ecosystems. In the Baltic, currently around 7.9% of the surface is designated as Marine Protected Area as part of the Natura 2000 network. However, additional Baltic Sea Protected Areas are designated under Helcom recommendations and, along with the Natura 2000 network, the marine protected areas comes to a total of 11,6% of the Baltic.

But the fact that an area is designated as an MPA does not mean it is actually well protected. As a matter of fact, as of today, only 13% of the Baltic Sea Protected Areas actually include a proper management plan – in other areas destructive fishing, fisheries with high bycatch rates, dredging and other unsustainable activities are still common.

Several scientific assessments have been carried out and they have shown that the current network of protected areas in the Baltic is not sufficient. Scientists found that these areas are small, poorly distributed and lack ecological coherence.  They are mainly located in the central area of the Baltic, most of them on the coast rather than in the deep sea, and the network does not include important areas of high ecological value or areas that are important in fishing terms.

Expeditions Support Oceana’s Proposals
Oceana has conducted several expeditions to the Baltic to gather biological data as well as information on fishing activities to support Oceana’s proposals on Marine Protected Areas and fisheries management. A small, portable underwater robot (ROV) for coastal areas is used for depths and a team of scuba-divers and underwater photographers and videographers is also used to document the areas.
Preserving Baltic Biodiversity
Our team of specialists works in the Copenhagen office to protect this unique sea, which covers 377 thousand square kilometres in the North of Europe and is almost entirely surrounded by nine different countries, from IUU fishing and improve the network of Marine Protected Areas.